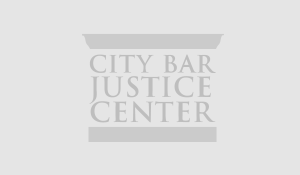 Rob was sued by the U.S. Department of Education for a defaulted student loan that he had taken out over 20 years ago to pay for a program at a trade school – a program that turned out not to exist.

The school had promised Rob a GED program and paralegal training. When the recruiter revealed that the school did not offer a GED program, which was a prerequisite for paralegal training, Rob was forced to pay a cancellation fee and was not given any information about the loan. Rob never received any education from the school, which went out of business several years later.

The government began garnishing Rob’s wages from his low-paying job for the $11,000 loan and accrued interest.  The federal judge handling his case personally referred this defendant to the City Bar Justice Center’s Federal Pro Se Legal Assistance Project. The judge also put on the record his request that the loan be discharged because the client received no educational benefit.

The Project attorney and a pro bono volunteer attorney researched the possible legal avenues for loan discharge. The Project attorney then wrote a letter to the government’s attorney proposing settlement based on that research and assisted Rob with preparing his formal application for loan discharge based on false certification by the school. After more advocacy, the U.S. Department of Education agreed to discharge the loan and all interest owed in full, to withdraw the garnishment, and to drop their lawsuit against Rob.

Rob can move on with his life without this damaging blow to his credit record. Thanks to pro bono legal assistance, he no longer needs to repay a student loan and a large amount of interest for a course of study he never received from an unscrupulous school.