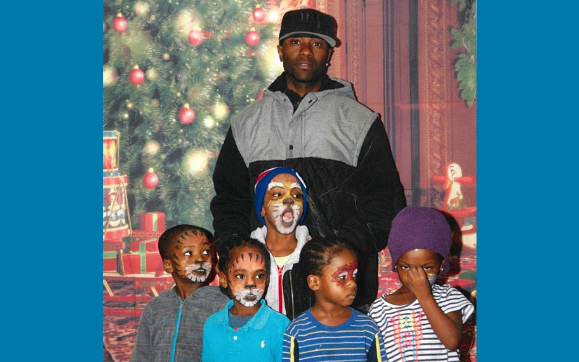 “My Kids Are All I Care About”: Father of Five Fights Homelessness, and Wins

Every day at the Justice Center we’re inspired by the fathers we serve, who fight tirelessly for their children. These dads often face seemingly insurmountable obstacles to fulfilling their kids’ most basic needs, and yet remain relentlessly committed to them. For Father’s Day, we wanted to celebrate the struggles and perseverance of these dads by telling the story of one: Mr. Martin, a father of five who has worked closely with the Justice Center’s Legal Clinic for the Homeless.

When Mr. Martin lost his home after accepting a cash for keys offer from his landlord that, because of a twist of fate, left him both cashless and keyless, he found himself with no other option than to move himself and his five children from their home in Staten Island into a family shelter in the Bronx. Adding to the stress of the move, the location change forced him to quit his job, leaving him without a source of income to support his family.

Raising five kids would be difficult in the best of circumstances, but raising five living in a homeless shelter is unimaginably so. Parents in homeless shelters must balance the daily challenges of setting up childcare arrangements, looking for housing, job searching or working, putting food on the table, and navigating the pitfalls of the welfare system, all while complying with the constraints imposed by the shelter. And yet, despite the countless difficulties of parenting under these circumstances, Mr. Martin’s children are happy, healthy, and well-adjusted kids, whose adoration for their dad is obvious for all to see. For Mr. Martin, life has always been about providing the best he can for his children. In his words, “My kids are all I care about.”

Like so many other people in the shelter system, Mr. Martin wasn’t getting the benefits to which he was entitled. Because of bungled paperwork, he was only receiving public assistance for three of his kids, but was using that assistance to raise five. He initially tried to sort out the problem himself, but as his stay in the shelter stretched on and the issue stayed unresolved, he and his social worker realized he needed expert help, and reached out to the Justice Center’s Legal Clinic for the Homeless (LCH).

The welfare system is so convoluted and bureaucratic that it takes advocates and lawyers to get results – not because people like Mr. Martin lack the innate ability to resolve them on their own, but because these advocates frequently have to draw on their relationships with higher ups to fix errors that happen at a lower level. When LCH Director, Lisa Pearlstein, and pro bono attorney and Vice President at CPR, Anna Hershenberg, got involved in the case, they sent a few emails to the right people and were able to secure Mr. Martin over $7,000 in current and retroactive benefits. As Ms. Hershenberg says,

Reflecting on her experience working with Mr. Martin, Ms. Hershenberg says that the most amazing part of the work was getting to know him, and seeing the impact the service she and LCH provided had on his family’s lives. Urging other lawyers to consider getting involved, she says,

Doing pro bono is a way to help people instantaneously, and make a real positive impact on the world around you. As lawyers, we have an obligation to give back to the community and do what we can for people in need.

After eleven months in the shelter, Mr. Martin and his kids are finally moving out in the next few weeks. Using the benefits he received, which included a housing voucher, he found permanent housing, and now he’s looking for a well-paying job to better support his family financially. “I just want to be here for my kids,” he says.