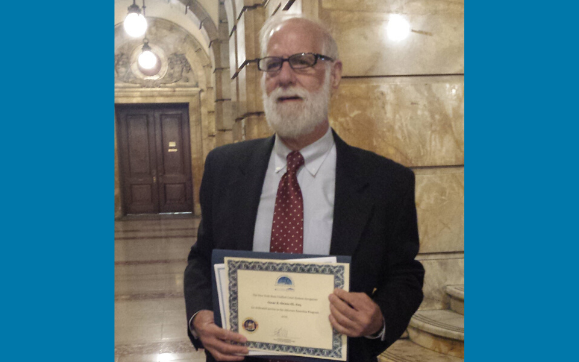 Ariana Javidi is the Communications and Executive Coordinator for the City Bar Justice Center.

Since he started volunteering with CAP/ELP in 2014, Mr. Straus has logged nearly 3,000 hours of pro bono service, and has completed almost 300 hours just this past year. He has distinguished himself through his empathy, compassion, and attention to his clients, going above and beyond in his advocacy for them.

Mr. Straus’s exceptional pro bono advocacy is exemplified in a recent case he took on for a CAP/ELP client. The client was a hospitalized man ill with advanced prostate cancer whose fiancée contacted CAP/ELP requesting urgent help with life-planning documents, both aware he did not have much time left. The client had three minor children, one from a previous relationship and two with his fiancée, and he was anxious to prepare legal documents so that his fiancée would have the right to speak and act on his behalf on all matters. He also wanted to state his wishes about the distribution of his property to her and his children after he passed away.

When Mr. Straus was assigned the case, he immediately met with the client at the hospital to determine his wishes with respect to a will, health care proxy and power of attorney. Despite his pain, the client was able to make his wishes clear. Recognizing the urgency of the situation, Mr. Straus completed the assignment within three days, drafting the documents and coordinating with the couple to have witnesses in place when required. After signing the documents, the client was extremely relieved to know that his wishes were legally in place and that his fiancée would have the authority to represent him before and after his death. Secure in knowing that this crucial matter had been taken care of, they were able to focus on spending time together with their children until he passed away 10 days later.

This client is one of hundreds that Mr. Straus has helped over the five years he has been volunteering for CAP/ELP. His tireless advocacy and service shows the powerful impact just one person can have through pro bono service, and the difference this service makes to individuals and communities in need.

The CBJC is still open with our team working remotely.